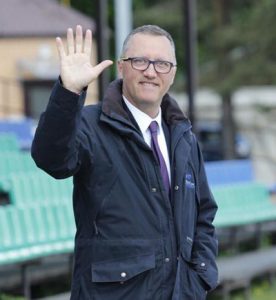 In 1985 he graduated the „G. Dimitrov“ Higher Institute for Physical Culture and Sports in Sofia, specializing in Equestrian Sports, Master’s degree.
Since 1985 he has been a judge in the disciplines: jumping, eventing and dressage.
Since 2015 he has been a steward in discipline endurance.
From 1985 to 1987 he is an equestrian coach at club Electron, Stara Zagora.
Since 1987 he has been an assistant professor Equestrian Sports at the Technical and Ice Sports Department of the National Sports Academy „Vasil Levski“.
In 1991, he made a three-month specialization in Germany at a riding school in the town of Fürzen-Dülken.
From 1996 to 2012 he was chairman and coach of the St. George Club, director and organizer of the annual St. George International Jumping Tournament.
Since 1996 until now he has been a member of the Managing Board of the Bulgarian Equestrian Federation – chairman of the committee for cadres – coaches and judges.
Since 2014 he has been awarded the Doctor degree (PhD) in Physical Education Theory and Methodology.
From 2016 he holds the academic position „Associate Professor“.
He is the author of the books: „Analysis of permissible errors of horse and rider in jumping obstacles“, „Basic dressage of the horse“, „Training guide for equestrian rider“, „Horse training guide in equestrian sport“ „Control and evaluation of sports training in equestrian sport“, „Theory and Methods for Dressage disciplin“, „Improving the training of rider and horse for jumping obstacles“ and over 30 articles in equestrian sport. His dissertation work is entitled „Visualized methodology for initial training in equestrian sport“.
Since 2017 he has been Vice Dean of the Coaches faculty at the National Sports Academy „Vasil Levski“.